Now more than ever, in this era of Muslim bans and large scale deportations of undocumented immigrants, I have been feeling like I need to do something concrete to intercept bias and hatred. Signing petitions, marching for women’s rights, donating to immigrant rights organizations — many of us are doing these things already.

But we need to consider ALL the strategies we each have available to promote justice and respect. We each have unique opportunities, different strategies, depending on our experience and position in life, and we can use our sense of agency to leverage those opportunities.

For example, as an educator, I can reach my students and hopefully make a positive difference in their lives. And as a filmmaker, I also have the opportunity to share the stories and experiences of the women in “Just a Piece of Cloth”. I have found that the most powerful changes take place through dialogue before and after the film as people share with one another — what affected them in the film, how they see things differently afterwards, and what they plan to do with that change in perception. The film is a trigger that helps us to explore deeper connections with one another, as well as consider how we act in the world to promote respect and justice.

So excited to get the news that Just a Piece of Cloth is one of the Official Selections for the CommFFest Community Film Festival in Toronto, Canada, Sept 12-20th, 2014!
The festival sounds amazing and perfect for the topic of this film: It is designed to promote dialogue on global social change issues; along with screenings of films, it features workshops for youth and adults. Our film is part of a special theme on interfaith dialogue. Check out the website: www.commffest.com

Just a Piece of Cloth received a small grant from the Open Meadows Foundation! The grant is focused on outreach to educational communities and will be used to develop lesson plans that will extend the learning that is possible from the video.

We continue to hold screenings, mostly in the Bay Area but also in a few other places! Here are a few examples:

The Bettendorf Public Library in Iowa showed the video on April 24, 2014, and hosted a panel discussion. “We showed Just a Piece of Cloth to a most appreciative audience. They all seemed to find a different woman to relate to. Most of the audience of 40 people was female and not Muslim. We had a panel discussion with women of Bangladeshi, Pakistani, and Arab heritage and the President of the Muslim Community of the Quad Cities who converted to Islam.” (Hedy Hustedde, Bettendorf Public Library)

The Monterey Institute of International Studies also had a screening. Here are some comments: “It changes my view about hijab. I thought it was imposed on Islamic women, but it is not.” “Please, in this day and age, more Americans need to be educated about this!” “Maybe the title can be misleading if people just see the title and don’t see the film.” (actually, there was an extended discussion about the title and it was suggested that it should have a question mark at the end.)

This Spring, we held two screenings at the Muslim Community Association in Santa Clara — one for women and one for girls. Both events were well attended and generated a lot of great dialogue. Here are a few comments I was able to write down: “One of the things that doesn’t get talked about much is the rift between converts and their families. We need to do a better job of helping people understand the purpose [of the hijab]”. Young girls who are starting to wear hijab also face the challenge of how to explain to curious non-Muslims why they suddenly now wear hijab. “How can I respond when people ask me why I wear it?” Also, the topic of “choice” generated a lot of discussion. Non-Muslims often assume that women wearing hijab in the US are forced to wear it, and a common response is “No, it’s my choice.” We all began to wonder, is this discourse of choice is really an oversimplification, used to counter the stereotypes of oppressed Muslim women perpetuated by the media? Does the concept of choice get too much emphasis?

Here are a few snapshots of what people have said at different screenings:

Woodland Community College:  “Very informative — I didn’t know about hijab and the different points of view, for instance that it’s a choice, not forced.  I like that different ethnicities were used.”

San José State University: “I consider myself as a Muslim but I learn something new every day about my religion so it’s unfortunate we put a lot of pressure on converts to automatically be a ‘perfect’ Muslim.”

“I really gained insight on how many different variations of opinions there are within the Muslim community. In America, we never really take the time to understand people, and instead we are quick to label others that are different from ourselves. It was really cool to actually see how similar these women are to me: Arwa’s tomboy nature, Dian’s struggle with finding her identity, Nur Laura’s difficult past, and Masha’s fire within her to do what she feels is right. I feel like I am going to have so much more respect for Muslim women when I see them wearing the hijab because now I know some of the thought, struggle, and dedication that goes with it. These new thoughts that I have about Muslim women can be applied to my life because there are many people in my classes that wear hijabs. Now I will feel more obligated to hear their story and have more respect for all of these women because it truly is not just a piece of cloth, there is a real story, one that everyone should hear, under each piece of cloth.”

5th grade class, San José:  The teacher, Fabio Coelho, used the film to supplement a unit they were doing on stereotypes. First he showed them photos of women wearing hijab and asked them what the women are wearing and why (see photo).  Then, they discussed what stereotypes are and then they viewed the film. Students were asked to identify the stereotypes they heard about in the film.  One student wrote, “People think Muslim women didn’t go to school, all girls love makeup and dolls, Muslim women don’t like to have fun, and women who wear the hijab are oppressed. These are stereotypes.” 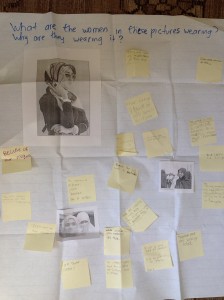 Just completed an exciting season of previews and film discussions with educators and community groups in the San Francisco Bay Area.  Waiting for news about festivals…Right now the film is only being shown at limited screenings, but it will be available for purchase in 2014.